The Leader of the Pack - the PGTAA ... See MoreSee Less

Why the PGTAA is regarded as the premier golf instructor certification program worldwide.

This year you, your family, and loved ones celebrate the 244th Independence Day in America, commemorating the Declaration of independence of the United States, on July 4, 1776.

The past year has been a hugely eventful one for us all. We are living through terrifying times but we must remain confident and positive that the future is a bright and sunny one for us, our families, and our loved ones.

This special day is indeed a time for reflection for not only Americans but for the whole world.

Do you become increasingly nervous as you prepare to putt? Are you afraid of hitting bad shots while you address the ball?

Chances are that your thoughts are major distractions interfering with your body's ability to make a confident swing.

In our Golf Mental Game Survey, one golfer brought up the topic of overthinking during competitive rounds:

"I freak out every time before I putt. I can't stop thinking about messing up. I try to talk myself through my putts, but I still miss easy putts. How can I calm down during shots?"

Your nervousness sprouts from overthinking or 'walking through your putts' and worrying about the potential outcome of your shot.

You know that worrisome feeling when the "what ifs" invade your mind. It is, as if, you time traveled into the future and watched the worst shot you ever hit. When you think too much, you lose your touch.

Overthinking traps you in an overwhelming cycle of thinking about what might happen... Coaching yourself through your mechanics... Reminding yourself of what NOT to do... Losing focus.

When you 'freak out' about your shots, your body tenses, you grip the putter harder, and you take extra time before you strike the ball. That delay before hitting the ball exacerbates the problem by giving you more time to over-think and over-analyze your shot.

When you panic about your shot, you signal to your brain that you are not ready for the putt. This thought distraction makes your stroke feel unnatural and forced, causing you to push the ball wide of the hole or leave the ball short.

For example, PGA golfer Collin Morikawa has improved his putting game by tuning out thought distractions and immersing himself in the act of putting.

MORIKAWA: "It was just to be more of an athlete, be an athlete that reacts to your target. You look at all other sports, basketball, you think basketball, they're always looking at their target. I thought of Jordan Spieth when I was putting, when he used to look at his target, he was reacting...."

Reacting or immersing yourself in your shot requires trust. Trust doesn't magically happen when you play a competitive round.

Playing a round of golf is not the time to 'fix' your swing. Trust is developed in practice. When you have trust, you are hitting the ball with confidence.

Tip to Gain Trust in your Golf Game:

(1) You can't think about the what-ifs--what if I miss this putt.

(2) Focus on your routine when putting or hitting shots, not the outcome.

(3) Over the ball, you must focus on the target on where you want to hit the ball or putt.

(4) Trust your muscle memory to hit the shot and avoid self-coaching or overthinking ... See MoreSee Less

The PGTAA is the single largest golf teaching organization in the world. 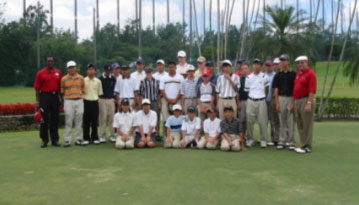 The PGTAA continues to mature into the world’s best teaching program and its acceptance worldwide is evidenced by the superior quality of its Master Teaching Professionals around the globe.

The PGTAA Newsletter, published quarterly, offers ideas and input from around the world that broadens your perspectives, exposes you to teaching methodologies incorporated in different cultures and sharpens your professional skills.

Listed below alphabetically are all the PGTAA worldwide divisions’ professionals ready to improve your golf skills. Please feel free to contact them for further details about the PGTAA, how to become a Master Teaching Professional or to take lessons.