Mater Dei’s Martin is girls golf coach of the year 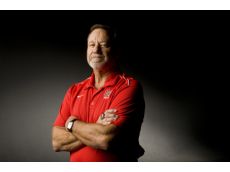 PAUL RODRIGUEZ, THE ORANGE COUNTY REGISTER
Mater Dei’s Ollie Martin is the 2012 girls golf coach of the year.
Mater Dei coach, Ollie Martin, a PGTAA graduate, stood on the practice putting green at The Golf Club at Rancho California, staring at the leaderboard on the on a wall of the clubhouse after the WSCGA So Cal Regionals.
His disappointment was easy to see. Two strokes separated the Monarchs from a tee time at the CIF State championship. This was a Monarchs team Martin believed had the talent and depth to win the most prestigious tournament in high school girls golf.
While the Monarchs came up a bit short in reaching their ultimate goal, to get to the WSCGA tournament, they made school history, and for that Martin is the Register’s Coach of the Year.
The Monarchs had three future Division 1 players on their roster in 2006 and had a team go undefeated in 2010. Neither could do what the six girls in the postseason roster did this year.
By finishing second in a qualifying tournament at The Legends Golf Course in Temecula, Mater Dei earned spot in the So Cal Championships for the first time in school history.
Senior Marcella Pranovia led the team that day, shooting the low round of the tournament, a 5-under 67. Jamie Harada, Ashley Nguyen and Janneinne Le all posted rounds in the 70s that day to show the real strength of the Monarchs this season — depth. Everyone on the roster had the potential to break 80.
“I am extremely proud and happy of what we were able to accomplish. I knew that we had an outstanding team from the very beginning,” Martin said. “They went after a goal. They didn’t come up short for a lack of effort or commitment. We started to prepare right from the beginning.”
Early in the season, Martin had the Monarchs play a practice round at Mile Square Golf Course, site of the CIF-SS Southern Team Divisional, which set the field for the regional qualifier. Several times after that, the girls on the team came out to Mile Square on their own.
Mater Dei cruised to a 15-stroke victory after four of the six Monarchs who teed off in the tournament finished in the 70s. It’s an event that the twice before, but this is the first time that the Monarchs will get rings or a banner hanging in the gym. This season the CIF changed the status of this team divisional, making them official CIF Championships.
“I am most proud of that. They were feeling the pressure because they wanted it bad,” Martin said. “That was huge.”
Martin takes pride in winning the Trinity League championship, and his Monarchs did it with an undefeated season, their second in the past three seasons. In both those years, the JV team has had a perfect season, too, showing just how deep the girls golf program has become.
Recently, Mater Dei built a practice facility on its campus, complete with launch monitors and a short-game practice area. The coaches also do video analysis of each player’s swing. The Monarchs also put the girls through a new workout regimen and try to get them to focus on eating healthy by getting lunches through the nutrition window in the school’s cafeteria.
“It was a combination of all that (that contributed to Mater Dei’s success). But I am blessed with great assistant coaches, too: Bill Dodge and Derek Uyesaka. And Ed Golka has been there on the JV team. We are very stable,” Martin said. “We have a lot of things going for us.”