Pebble Beach – the mention of these two words are sweet music to golfers around the world and the mention of a US Open further conjures thoughts of class, elegance, and excitement for these premier events.

For one week each year, the pursuit of the famous US Open trophy is the focus of the sporting world, followed globally by millions of fans.

The World Golf Hall of Fame is a pinnacle of achievement and acknowledgment for golfers and the golf industry. The Sunset Center in Carmel-By-The-Sea was the venue. 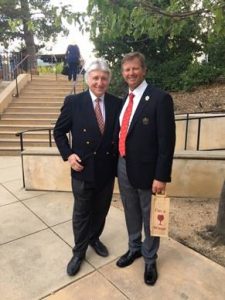 Now combine Pebble Beach, US Open and add in a World Golf Hall of Fame induction and voila, you have the hardest ticket in town, no country, to find.

Receiving an invitation by an inductee, Retief Goosen, together with press credentials and player support credentials, is an honor and a privilege. 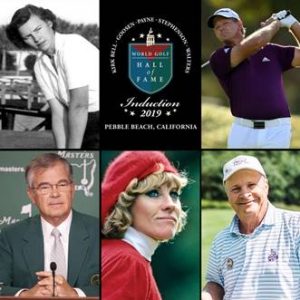 The induction is now every other year and coincides with big golf events — the U.S. Open at Pebble Beach in this case. There were 28 Hall of Fame members in the audience, many of them U.S. Open champions who were honored at a dinner later that week.

The induction brings the World Golf Hall of Fame to 160 members. The final selection is by a 16-member panel, the majority golf administrators. Image from PebbleBeach.com

Highlights of the induction ceremony were comments by the inductees, such as those by Retief Goosen regarding his lightning strike incident, “The lightning sparked something in me,” Goosen said with a wry smile.

Dennis Walters quipped – “Can you believe I’m in the World Golf Hall of Fame before Tiger Woods?”

Jan Stephenson was part of what she described as “the most competitive and colorful era” for the LPGA Tour, and several others from her generation — from Beth Daniel to Meg Mallon, from Juli Inkster to Pat Bradley — are in the Hall of Fame and watched from the audience.

Peggy Kirk Bell was the only posthumous inductee from this year’s class.

Kudos need to be attributed to the USGA. Unlike previous US Opens, criticism was non-existent this year, rather compliments were the order of the day. 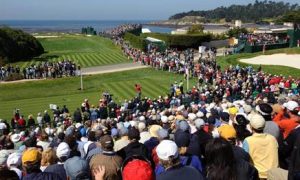 Having been to numerous US Opens, as both an instructor and media member, this year the total setup, from the course itself, spectator access to the course and parking availability, to the practice range and practice putting greens, to the administration and player compounds, were all exceptionally user friendly. This was one of the best organized tournaments I have personally attended.

Saying the tournament itself was exciting, would be an understatement. Locked in a back-nine duel with two-time defending U.S. Open champion Brooks Koepka, Gary Woodland pulled away with a trio of heroic shots to win his first Major.

My next article will be from the British Open and a weeklong visit to Ireland to play some golf.

Barry Lotz, J.D., Ph.D. is the director of the Professional Golf Teachers Association of America. Visit www/facebook.com/PGTAA to see all the latest mental strategies and equipment reviews. He is a member of the Golf Writers Association of America and serves both as a Consultant and Mediator to the golf industry. He is also the author of numerous books, including “333 Best Web Sites for Golfers” and his previous book, “How to Build Business Relationships through Golf”, is still considered the primary reference for golf businesses. His latest book, “The Right Mind for Golf”, is now in its 9th reprint is available on Amazon and at the Torrey Pines golf course. He also has as many as 14 PGA Tour members availing themselves to his mental coaching and putting advice.
He can be reached at drlotz@cbsgolf.net

Srixon Unveils the Z-STAR Series DIVIDE SRIXON® , a global leader in golf ball technology and innovation, announces the launch of the Z-STAR Series DIVIDE. The Srixon Z-STAR and Z-STAR XV DIVIDE golf balls are available in a Yellow/White colorway, and officially launch in North America on Jan. 21, 2022. “We are thrilled to be launching Z-STAR DIVIDE and Z-STAR XV DIVIDE,” said Brian Schielke, General Manager of Srixon North America. “While they certainly stand out on the course, the performance benefits are what excite us the most. They’re so easy to align your putts, see flying through the air, and give great visual feedback on pitches and chips around the green.” The Z-STAR Series DIVIDE combines Srixon’s 50/50 Visual Performance with our tour-level golf balls to offer a new ball that stands out on the course. With the new colorway on the Z-STAR and Z-STAR XV DIVIDE, putting alignment becomes simple and players of all skill levels can track their spin, especially around the greens.These golf balls feature Srixon’s SpinSkin with SeRM, a durable coating on the thermoplastic urethane cover that digs deep into wedge and iron grooves at impact for optimal spin and control. Meanwhile, the FastLayer Core and 338 Speed Dimple Pattern work in tandem to produce exceptional distance and feel. While it might look different, the Z-STAR and Z-STAR XV DIVIDE delivers the same standout performance that many golfers have come to expect from the classic Z-STAR Series golf balls. “The Q-STAR TOUR DIVIDE launch exceeded all expectations and bringing this same technology to the Z-STAR Series family will help get the DIVIDE technology in more golfer’s hands,” Schielke said.Key Technologies :FastLayer Core: The new FastLayer Core starts soft in the center and gradually becomes firm around its edge, it gives high-speed players exceptional feel and plenty of ball speed for maximum distance. On the Z-STAR XV DIVIDE, a newly formulated inner core adds resiliency for even more ball speed.SpinSkin with SeRM: A high contract white and yellow thermoplastic urethane cover features SpinSkin with SeRM, a durable coating with flexible molecular bonds. It digs deep into wedge and iron grooves, maximizing spin for more control and stopping power.338 Speed Dimple Pattern: Less drag and more lift boosts overall distance and flies straight, even in the toughest wind conditions.Price: $44.99U.S. Retail Launch Date: January 21, 2022 ... See MoreSee Less

2022 - Become a Certified Mental Coach - Endorsed by the PGTAADid you know that you of your athletes can do mental training from the comfort of your home? You can do one-on-one mental coaching via Facetime, Skype or Zoom with us from anywhere. We work with athletes about 12 years and up. And mental training is not just for elite or professional athletes. If you are interested in mental coaching, try our free 15-minute introductory session. Just respond to this email with your name and what you want to improve. We look forward to helping you or your athletes improve your mental toughness! Your Mental Coaches, Patrick Cohn, Ph.D. & Jaclyn Ellis, M.S.Sports Psychology for Golfby Peak Performance Sports, LLC P.S. Coaches: Become a certified mental game coach! Learn all of Dr. Cohn's strategies in the MGCP Certification course. Registration for the Spring Course is open until the end of January.www.mentalgamecoachingpro.com/mgcp-sports-psychology-certification/ ... See MoreSee Less

From PGTAA member Dr. Patrick CohnAre you able to convert pressure into energy, enthusiasm, or excitement during high-level tournaments?Golfers who choke under pressure usually make the moment bigger than it is. In other words, they assign more significance to big tournaments than other competitions.When you view a big event as important, you'll often feel more pressure, fear the possibility of failure, and experience a heightened level of anxiety. Fear and anxiety are the major contributors to choking.Think of it as the following equation:Fear of Failure + Increased Pressure = Anxiety + ChokingFor example, if you view a tournament as the most important competition of the year or a must-win, you will put more pressure on yourself. You will think, "I have to be my best. I worked hard all year for this tournament. If I don't perform well, my season will be wasted." You will think of all the people expecting you to achieve a personal best performance. That is a lot of pressure to put on yourself. Under these circumstances, your mind will be full of doubt, and your body will feel tight. Focusing will be difficult. Decision-making and reaction times will slow up. All these factors lead to choking.So, how can you perform better under pressure?You can prevent choking and perform better by changing your perspective about pressure or the importance of a competition, "This tournament is just another competition. I've been competing in this sport for years. I'm well-trained and prepared. A little pressure will help give me a boost of energy and improve my focus."The competition hasn't changed, but your perspective about the importance changed. Of course, weather and arena conditions may differ, but most aspects of the tournamnet remain the same.A shift in perspective changes your thoughts and emotions and fuels performance. Maintaining perspective, thinking of your skills, and preparation foster positive emotions, helping you manage pressure. These conditions foster peak performance.Handling Pressure in High-Level Tournaments Don't wait until you arrive at an event to cope with pressure. Getting ready for a major competition requires the mental work ahead of time. Start by anticipating what you might feel in this event? What are the emotions you might have? What are the challenges you can anticipate? Next, how will you cope with these challenges and emotions. For example, if you have to play in extreme cold or warm conditions, how will you cope with this?A prepared mind will help you manage pressure and perform at your peak.www.peaksports.com ... See MoreSee Less